If I had to use one word to describe the Autumn|Winter 2014 season at Mercedes-Benz Fashion Week, I would use the word changes. The months and weeks leading up to NYFW caused a lot of change. Alexander Wang had announced plans to show in Brooklyn, organizers added the Hub at Hudson venue to the mix and more well-known designers like Diane von Furstenberg and Michael Kors headed to Spring Studios in Tribeca. While heading into the events and shows, the vibe felt a lot different as in seasons past. But with change there also came reassurance that the designers, no matter where they presented, would give us something attractive to view. | Marielle Larkin

Tadashi Shoji | He started with the influence of Moorish Architecture, which he expertly conveyed through laser-cut dresses, dimensional and corded embroidery on tulle. It was regal, a touch of mystery and an overflow of romance captured in the lace, cape coats and floor-sweeping silhouettes. It’s so refreshing to see how he displays his themes so eloquently in his pieces. The jeweled tones of the Moroccan sky were beautifully brought forth in his color palette- the royal blue and white resembling intricate tile work were captivating as were the rich patterns in his evening wear. Every season, Mr. Shoji conveys successfully the beauty and confidence in a lady, and that was never more true than in his A|W 2014 collection. 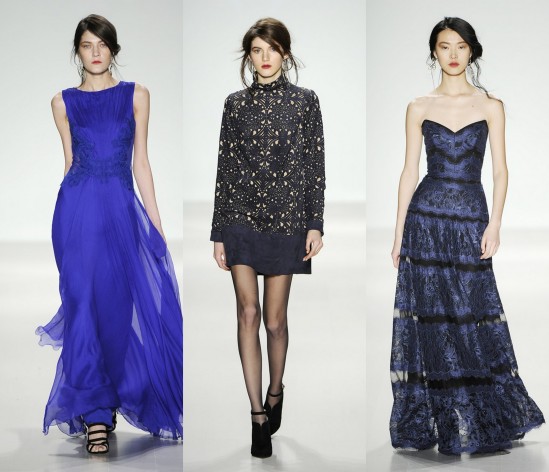 Jason Wu | We turn away from Moorish Architecture and head to “austere elegance,” which were stated in Jason Wu’s notes. Monochrome really ruled his runway along with structure and a dark color palette, which made for a sensual feel. Adriana Lima opened the show with a black wool crepe jacket, a black silk chiffon high-neck shell, and black wide-leg wool crepe trousers. Somewhat of a somber feeling. The fur trimmed outerwear, slip dresses and slinky fabric, however, gave us a more sophisticated feel while the deep cowl neck dresses and thigh-high slit skirts amped up the feeling of seduction. There was a contrast to the femininity with the oversized outerwear, though. With each piece there was a high level of sophistication, giving empowering ladies a touch of edge. 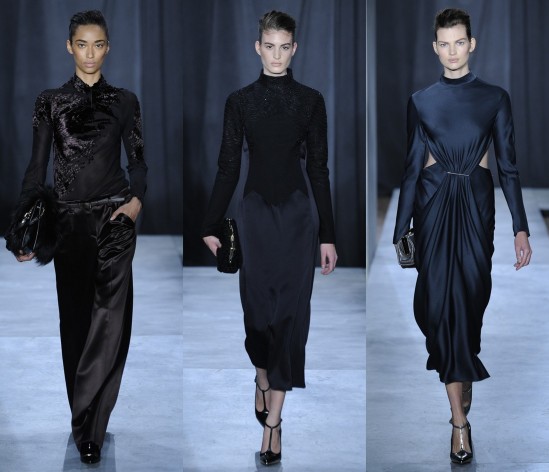 Prabal Gurung | His inspiration was from his last trip home to Nepal. While there, he couldn’t stop thinking about the remote Kingdom of Mustang; the Himalayan Kingdom of Mustang lies between northwestern Nepal and Tibet. Models came down the runway wearing pashminas and scarves sitting high and tight around their necks and versatility was shown throughout with the more relaxed pieces. Mr. Gurung has always been known for his show-stopping red carpet gowns, but the oversized knits really diversified his looks as well as a strong color palette from crisp winter white to the fiercest of reds. Deconstructed and draped pantsuits, tailored jackets, slit print skirts and dresses, and sultry cutout dresses and feathered skirts were all present. Embroidered bodices, thigh-high slits and detailed cutouts were extremely eye-catching. 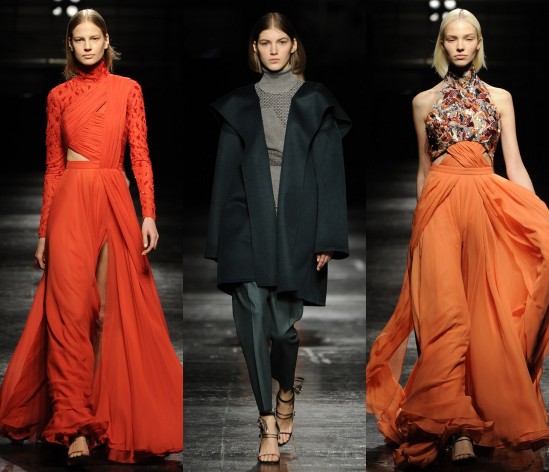 Mara Hoffman | It’s truly fascinating to see from where the designers gather their inspiration. For Mara Hoffman, she was heavily influenced from the culture, jewels, and backdrop of Northern Africa. She’s a designer known for her attractive and vivacious prints, so it came as no surprise when the models stepped out in striking geometric motifs along with relaxed silhouettes. A naturustic color palette of blacks and deep blues to crisp whites. Texture was key and several looks featured all-over sequins and intricately placed beadwork, displaying Ms. Hoffman’s growth as a designer. With a strong Bohemian influence shown throughout with weightless maxi dresses and caftans, there was also a sharpness to the tailoring with tapered trousers, a silk fringed suit, and topcoats. 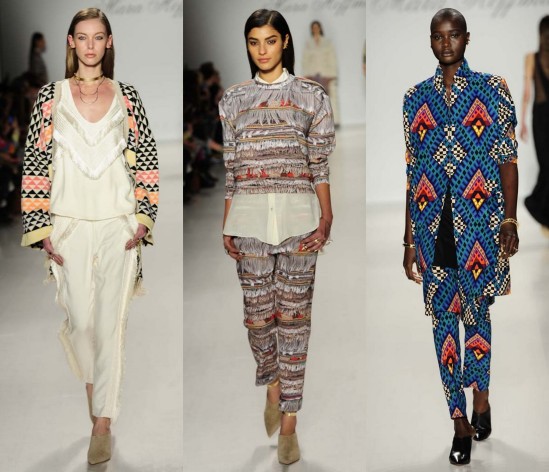 Rebecca Minkoff | From the carefree of Mara Hoffman to the menswear with a feminine twist from Rebecca Minkoff. Ms. Minkoff brought modernism, wearability and functionality. A color palette of winter pastels; pink, teal, grey and beige with pops of metallics and dark neutrals. Wool Crombie coats were shown with printed silk dresses underneath. Oversized outerwear was key along with knee-length skirts, button-down blouses, fitted trousers and pleated monochrome dresses. A great display of bold contemporary for the trendier lady. 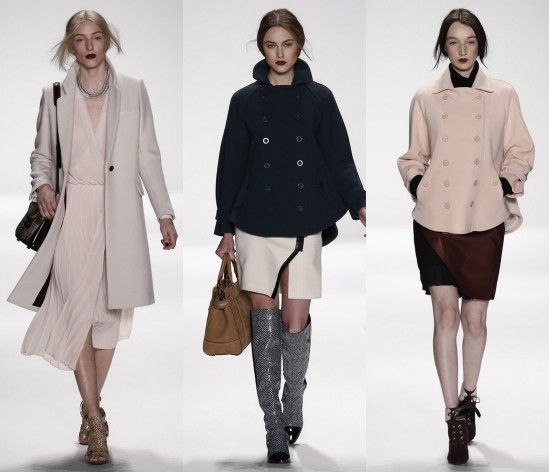