If there is someone on a mission in the industry, it’s Ms. Reem Acra. And she’s not doing it secretly either. Initially having started in the bridal category, Ms. Acra stepped over the boundary and into ready-to-wear with a forward and upward motion. It’s a crossover story that continues to gain momentum. Her Autumn|Winter 2013 collection was proof that she’s digging her trenches and carving out her brand. It’s an evolution and a revolution.

A departure from her usual sparkle, she darkened her collection, making it a little more serious and giving it a heavy dose of sultry femininity. Femme fatale to be more exact. Exuding an aura of reservation, the collection was also a barrage of kimonos and floral accents- inspirations from Japan and the Far East. Black leather slithered in various forms, goat hair bounced on outerwear. Ms. Acra also proceeded to caress the body with sheath dresses, slash geometric cuts in others pieces, and then dominate with fishnet. All achieved with refined subtlety… A vision of whispered secrets escaping from closed doors.

Rich embroidery provided detail where and when needed, also influencing the collection’s visual symmetry. Saving the best for last, the highlight of the lineup were the sculpted pieces- majestically draped gowns, exhibiting the designer’s talent and reminiscent of her other personality. She reeled it all in, ending the show with what she’s known for. One would almost be left to ponder: Was that her way of discreetly winking at her audience? | Giuseppe 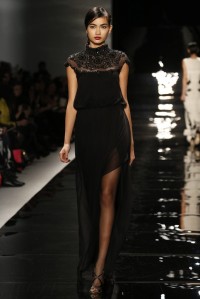 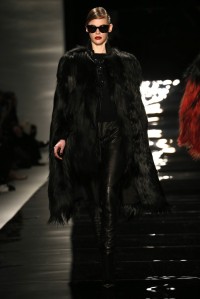 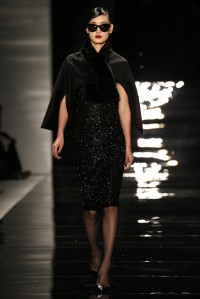 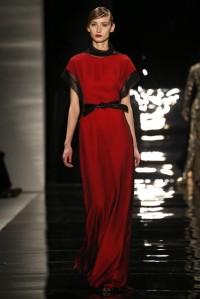 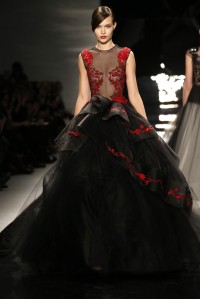 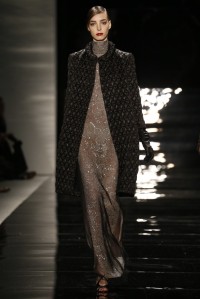