I don’t blame neither the designers nor the retailers. I blame the consumers. In a world where we’ve grown accustomed to gravitate towards the safe, most notably in fashion, we’ve also stagnated our desire to be creative, to be singular. To step out of our perceived comfort zones and try something “different” is a feat itself. We’re scared of the colors orange and yellow and society seeks refuge in those horrid comfort clothes.

And then, there’s Heather Lawton. The tall, frosty-eyed designer who designs for the ambitious and what we call adventurous in today’s fashion realm. For the latter part of 2013, it’s all about modern rockstar chic with a streak of sophistication. And I must say, it’s intriguingly attractive. It’s hard to pinpoint, but there’s just something about it. And perhaps that’s its raison d’être.

The collection is composed of an assortment of styles, almost seeming as if there’s a spectrum of some sort. Starting with more demure looks (but still particular) of asymmetrical blazers and nylon capes, the collection reaches its median at pieces with shearling collars and the patchwork skirts and then finishes off with the fur and animal hair pieces.

It’s Where the Wild Things Are, but with a refined edge: stingray, lamb leather, rabbit tweed, and pony hair. The long wool coat with accents of mohair and leather detailing is a beauty in person. Minimal and modern by definition, the collection is for a younger generation. It’s somewhat wild, but with a sense of restraint. It’s not running rampantly.

However, this is another instance where the pictures don’t do justice thanks to the garish camera flash. And so with all of that being said, Ms. Lawton nods her head in approval that it’s OK to step out of one’s comfort zone. But with that, one also needs a heavy dose of confidence. Do you dare to wear a little flair? | Giuseppe 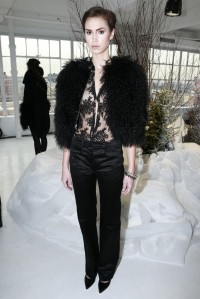 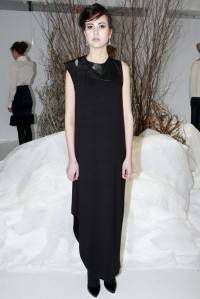