What a pleasure it is to say I prejudged the talents of Raf Simons.  The first collection was certainly not the excitement that the hype led me to hope for but then he went and did it with this collection.  Raf Simons delivered a discreetly spectacular collection that reeked of the Dior DNA as well as his stamp on the collection.

This assortment just oozed this incredible delicacy and lightness that has not been seen for some time at this fabled house.  Mr. Simons infused the quality by seemingly employing fabrics that appeared weightless even when they were draped and embellished to death.  The embroideries were equally weightless in appearance even though one must assume that the dresses were quite weighty.  The tulle or soufflé embroidered gloves made it appear as if the models were tattooed with the floral patterns.

While we are on the subject of models, they all seemed to be cookie cutter short haired gamines of the Audrey Hepburn variety despite the heavily glossed and probably vaselined lips.  The young women were all pale faced without appearing to be “dead girls walking.”  I am even hopeful that Mr. Simons might re-introduce a turn on the runway which will decrease his availability of models but wouldn’t it be fun to see the back of dress all in one exit rather than hoping to see it on its return walk?

The shapes and silhouettes were just exquisite; slim without being second skinned, full without being theatrically full and body skimming without being sack-like.  The deft that he showed with draping is exemplary and the full on gowns seemed to float despite their volumes.  The vibe was somewhat retro without being over referenced and surely a modern take on the brand of Dior. Okay, I have gushed, and I am now a great fan so I can only hope that every collection will hold such awesome wonders and it will be at that point that Mr. Simons will re-write his history at the legendary house of Dior. | Jeffrey Felner 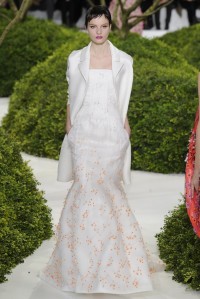 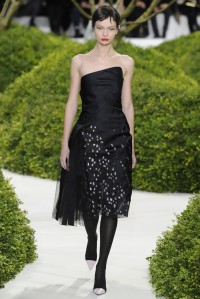